Star Wars is a series of science fiction films created by George Lucus. Many animatronic, puppets, and full-bodied characters were used in the films. Some of the largest characters (such as Jabba the Hutt) were controlled with strings, remote control, etc. Jabba was made using computer animation in a few of newer films.

An online video parodying Star Wars was made, titled Grocery Store Wars. All of the characters were puppets, using strings, wires, and some computer animation. 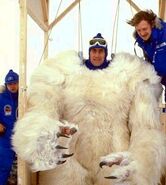