The Strategic-Artificially-Intelligent-Nuclear-Transport (S-A-I-N-T) robots consisted of five prototypes for the US Department of Defense.

Each unit is reported to have cost $11 Million Each (USD, 1986) and is both designed and manufactured by Nova Laboratories Inc, Robotics Division, located in Damon, Washington, 98615.

Chief designer Dr Newton Crosby, PhD, initially developed the prototype for use as a marital aid, however, the platform was later adapted for use in military applications, namely to do with the delivery of 25 MT nuclear weapons behind enemy lines

during the Cold War.

Each S-A-I-N-T unit is outfitted with a left-hand shoulder-mounted pulse laser weapon designed to strategically target key structural weakness points on enemy military targets to disable possible counter-insurgent attacks against the platform in the most efficient manner possible. Laser activation and target acquisition mode are indicated visually through the use of red-light optical sensors within the visual eye camera system and through a tell-tale red dot on the front of the laser cannon unit.

All Six S-A-I-N-T robots have their standard military head coverings, vocaliser protector mouth guards and helmets. Each of the S-A-I-N-T robots also has a small Homing tracker device built into their left side of the utility bar right next to the joint of the laser weapon and a Multi-tool arm ranging from a small secondary arm to a screwdriver and a rotating mini arm to help spin certain objects such as spinning the winch of a manual whisker as seen in Short Circuit where S-A-I-N-T Number 5/Johnny 5 makes Stephane pancakes. they also have a memory system down toward the caterpillar treads and just below the console mainframe (image on the top right) that can be wiped and cleared with and small remote syringe if gone rouge or some other issue.

S-A-I-N-T Prototype Units are identified individually through an installed stamped plaque on the ventral side of the main body undercarriage. This unique unit ID plaque indicates the production number and details on the location of Nova Laboratories Inc, Robotics Division. S-A-I-N-T Prototype Units also don't run on Nuclear energy as it applies in the name, S-A-I-N-T Number 5/Johnny 5 runs off a standard 12.6v battery which can last a long substantial time before needing recharging.

S-A-I-N-T saluting to the crowd 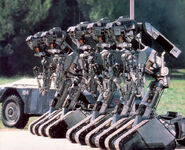 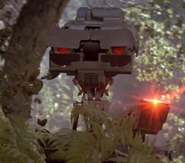 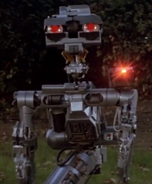 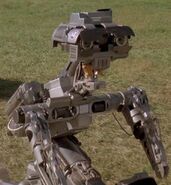 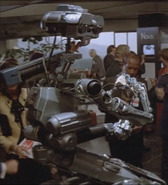 S-A-I-N-T Number 6 (non operational)
Add a photo to this gallery
Retrieved from "https://puppet.fandom.com/wiki/S-A-I-N-T?oldid=29205"
Community content is available under CC-BY-SA unless otherwise noted.