Puppet Wiki
Register
Don't have an account?
Sign In
Advertisement
in: TV Shows, It's a Big Big World, PBS

It's a Big Big World

It's a Big Big World is a children's television show on PBS Kids that debuted January 2, 2006, and is part of Miss Lori and Hooper's schedule block.

The show revolves around a group of animals living in the rainforest. The star, and host of the show is Snook the Sloth.

The characters in the show are performed using Shadowmation, a mix of Bunraku and Green-screen puppetry. Snook, Smooch and Winslow were on the cover of the Puppetry Journal in Spring of 2006. 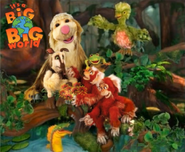