Allegra's Window is an American children's television series that aired on Nickelodeon through its Nick Jr. block from October 24, 1994, to October 1, 1996, with reruns being shown until February 5, 1999;[2] it was later shown on Noggin from February 2, 1999, to April 6, 2003. The series deals with the daily life of a precocious, imaginative puppet character named Allegra, and featured live actors, puppets and animation à la Sesame Street. The show was created by Jan Fleming, John Hoffman and Jim Jinkins, the latter of whom is also the creator of Doug. Two of the puppeteers, Kathryn Mullen and Anthony Asbury, would later work together on the PBS series Between the Lions as the performers of Lionel and Leona Lion. 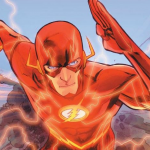